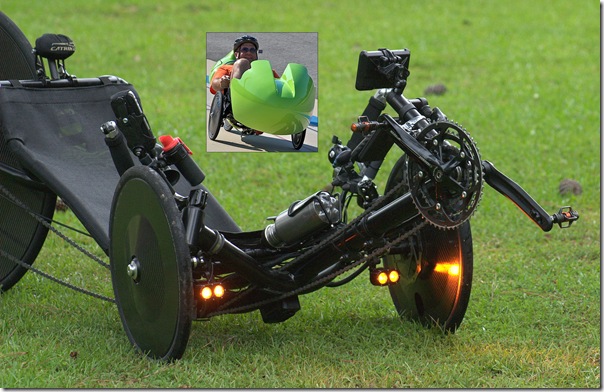 I have long tried to determine the optimal location to place my DiNotte 400L amber headlights as well as their 400L taillights, all this without the fairings in hand. I’ve used photographs of the two fairings taken by Jeff Bales and others. The fairings’ lines are so smooth [sweet] that I do not want to alter them by placing lights on or within the fairings.

Here, I’ve attached the lights [and batteries] on the trike and as low and as wide as I can. I’m anticipating there will be less air disturbance with them positioned as you see them rather than were they were located as before. The insert above, and other frontal shots, make me think this may work and yet give me the visibility intended. The alternatives are to mount lighting on or within the fairings. I am waiting for the extended version of Jeff’s current front fairing to confirm my lighting planning. I’m not one to wait to receive the fairing to begin planning. I plan to place the main headlight on the backend of the vision tunnel.

No change on the taillight position.

Your comments are welcomed.

Woodpeckers make a disturbing sound, especially early in the morning, as did this Pileated Woodpecker [I think I’ve correctly identified her]. Based on the damage, she or one of her friends has visited my residence before. I figured since she was keeping such a racket, I deserved to capture her on disc. To the right is a collage of photos I took, cropped, and uploaded to my flickr photostream. I even enjoyed watching Woodie Woodpecker Cartoons in my youth. According to miscellaneous facts on this Wikipedia page for this “beautiful” bird, it was the model for Woodie. All this, as I’m finishing up a customer’s computer. I’d loved to have been out riding one of my cycles.

…as I am, you may have noticed this blogs total PageViews are down by about 190 from a high yesterday of 29,016 or so. That’s because of some miscounting by WordPress.com.

Hi James, The grand total was counting a 20-hour period twice. You should now find your stats to be adding up the way they should. Thank you for reporting this issue. Cheers, ****

I reported this to WP 05/20 following known PageViews fluctuations as WP modified it’s statistics counting to align the stat-day with time zones versus Greenwich [Zulu] time. It took them 2 weeks to find and fix my counting error. I use a spreadsheet to crosscheck their numbers.

They are accurate now [Totals=Totals]. We are doing well. I appreciate your many visits and we’ll be back to over 29k real soon.

END_OF_DOCUMENT_TOKEN_TO_BE_REPLACED

In addition to these questions posted on the Catrike Board 05/27:

I also asked Jeff, these questions by PM on the Catrike Board:

Hoping for answers soon. Thanks Jeff!

In reply to the last 2 questions above, Jeff says:

He goes on to say:
I’ll start on the longer front fairing soon. =)
It’s time to head out to the factory in about an hour and start making some fairings! [Maybe my tail fairing ;-)].

I’m still waiting on responses to the other questions.